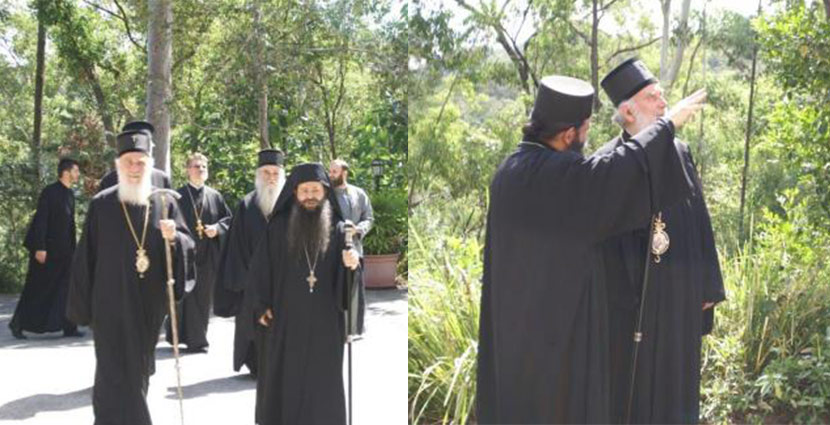 On Thursday 10 March, as part of His pastoral visit to Australia, His Holiness the Archbishop of Pech, Metropolitan of Belgrade-Karlovci and Serbian Patriarch Kyr Irinej visited Pantanassa Monastery. His Holiness was accompanied by His Eminence Dr Amfilohije, Archbishop of Cetinje, Metropolitan of Montenegro and the Littoral and Exarch of the Throne of Pech, Bishop Irinej the Serbian Orthodox Bishop of the Metropolitanate of Australia and New Zealand, Protopresbyter Stojadin Pavlovic, Director of the Patriarchal Administerative Board, as well as Deacon Aleksandar Sekulic, Secretary of the Patriarchal Cabinet.

His Holiness was received with the traditional monastic welcoming service and at the end of the service Elder Eusebios welcomed His Holiness and thanked Him for visiting the Pantanassa Monastery, 'These days with Your visit to Australia, all Orthodox Christians in this country, along with our Serbian brothers and sisters, as members of the one Orthodox Church, experience a great blessing and joy. A unique and magnificent occasion, since your presence, reminds us of an important ecclesiological teaching of our Church, the Lord in our midst. Living the presence of our Lord is the essence of Orthodox spirituality and the goal that we should all endeavour to experience, irrespective of one's position in the Church, and Your presence, not only reminds us, but helps us to experience this divine gift, for You, as a canonical Orthodox Hierarch and more so as the head of the Serbian Orthodox people all over the world, stand in the place and image of our Lord. This is our joy! For this reason we, along with your people, celebrate. We deeply thank you Your Holiness for visiting our Monastery.'

Welcome to the Pantanassa Monastery web-site

The Holy Monastery of the Mother of God 'PANTANASSA' is a coenobitic monastery for men located on the Central Coast of N.S.W. Australia. The monastery was established with the blessing of His Eminence Archbishop Stylianos, Primate of the Greek Orthodox Church, in 1976. It may come as a surprise to many that a monastic community founded on traditional Athonite monasticism exists in Australia. This is why, after many years of hesitation, prayer and humble reasoning, Pantanassa Monastery decided to create its own web-site. We pray that we will be able to respond to the magnitude of this task, and ask you to keep us in your prayers.

With the blessing of His Eminence Archbishop Stylianos, Pantanassa Monastery was founded in 1976 by the former abbot, Archimandrite Stephanos in Sydney, under its previous name, Holy Monastery of the Transfiguration of our Lord. The monastery remained in Earlwood, Sydney, until 1995, even though suitable land for the monastery was purchased at Mangrove Mountain on the central coast of NSW, in 1980. By 1995, a small dwelling had been constructed at Mangrove Mountain. With the blessing of His of Eminence the brotherhood later moved to this new site in the same year. Simultaneously, His Eminence renamed the monastery Pantanassa Monastery. The word, Pantanassa is from the Greek panta 'all' and anassa 'queen', hence the 'Queen of All'.

There are currently two priest-monks (including the abbot), one deacon-monk and two monks living there. Daily services are held in the chapel of Saints Ephraim (d. c. 373) and Isaac (d. c. 700) the Syrians, both pillars of Orthodox spirituality to this day.

The current monastic dwelling is located on the side of a mountain below a 200 metre cliff edge. It is surrounded by virgin forest overlooking a small valley and river.Current

In May 2005 construction of the full monastic complex began in earnest on top of this cliff, which overlooks the Dubbo Valley and nearby National Parks.

The monks support themselves by making prayer ropes, pure bees' wax candles, handmade incense, hand painted icons in the Byzantine style, and by mounting icon prints on timber, as well as other liturgical products.

'Our eyes must acquire a gentle glance, and so convey the mercy from on high.'