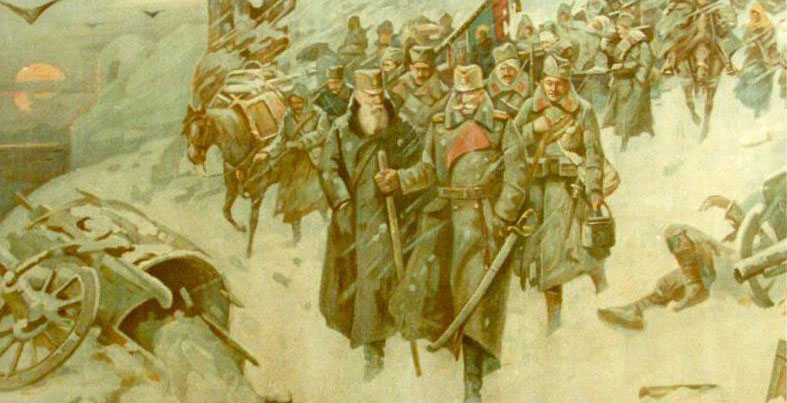 Exhibition: Serbia in the Great War

The exhibition is curated by Bojan Pajic and Richard Cooke who have collaborated in researching the experience of their relatives in the Great War. Richard's grandmother, Ethel Gillingham, from Geelong, Victoria, served with the British Red Cross in Serbia in 1915-16, whilst Bojan's grandfather, Lazar Stefanovic, and great uncle, Dragomir Profirovic, served in the Serbian Army throughout the war.
Through the experiences of their relatives, Bojan and Richard have also documented the wider experience of the Serbian people and the Australian volunteers who served with the Serbs in Serbia and in Salonika.

Exhibits:
- Framed service records and medals of Lazar Stefanovic and Dragomir Profirovic
- Display of Serbian Orders and Medals for Bravery
- Uniform of Serbian Officer with medals
- Australian Volunteers with the Serbs in the Great War: photographs and service records of ten Australian volunteers
- Uniform of an Australian Nurse in World War One
- Serbia in the Great War: 1915-1916; photographs of the fighting withdrawal through Albania and of occupied Serbia
- Display of Ethel Gillingham's Serbian Cross of Mercy and biographies of Australians who had served with the Serbs
- Display of military histories with focus on Serbia in 1915
- Display of posters used to raise funds for Serbia in World War One

Australian women volunteers with the Serbian Army in World War One are being commemorated with a special exhibition of memorabilia at a function in Melbourne on Saturday 5th September.

It is a little known part of Australian history that Australian women doctors, nurses, orderlies and drivers volunteered to serve in Serbia or with the Serbian Army in World War One. Many of the volunteers were the first women doctors in Australia, such as Mary DeGaris from Geelong, Agnes Bennett from NSW, Lillian Cooper from Queensland, Elsie Dalyell from NSW and Laura Hope from SA.

Nursing sisters also volunteered to serve, such as Ethel Gillingham from Geelong and Alice Stirling, from SA. The author, Stella Miles Franklin, volunteered to be an orderly and wrote about her experiences, whilst Olive King, from NSW, paid for her own ambulance with which she served in the Serbian Army as an ambulance driver. Olive is thought to be one of only two foreign women accepted into the Serbian Army during that war.

Memorabilia relating to two of these brave Victorian women, Dr Mary DeGaris and Nursing Sister Ethel Gillingham are being exhibited at the special celebration being organised by the Serbian Orthodox Church at Zinc@Federationsquare on Saturday 5th September.

In a chance work meeting, Richard Cooke of Camberwell and Bojan Pajic of Glen Iris, discovered that they both had relatives who may have met in Serbia during World War One; Richard's grandmother, Ethel Gillingham, was an Australian nurse volunteer supporting the Serbian Army in 1915 and Bojan's grandfather and great uncle, who was wounded in 1915, were officers in the Serbian Army.

Richard has co-curated an exhibition of Ethel's service, extracts of her writing about her experiences in Serbia in 1915, a World War One nursing uniform and the medal that she received for her work.

Bojan has curated the medals and service records of his relatives, photographs, histories, a uniform and other memorabilia of the fighting in Serbia in 1915 and the retreat of the Serbian Army, Government and civilian refugees through Albania in 1915-16, when many thousands lost their lives.

The function ar Zinc@Federationsquare, a dinner to be attended by Victorian parliamentarians and a representative of the RSL, will also include an art exhibition, entertainment by vocal artists and a choir.
For more information, see
http://www.metropolitanate.org.au
For tickets to attend the function, go to:
http://www.eventbrite.com.au/e/annual-metropolitinate-day-celebration-tickets-17237563015

Australian Medical Volunteers with the Serbs in World War One

Australian doctors, nurses, orderlies, drivers and assistants, mainly women, volunteered to serve in British units that were sent to Serbia in 1914-15 and to the Salonika (or "Eastern") Front in 1916-18, to assist the Serbian Army. Australian Army nurses were sent to serve in Salonika in the later part of the war.

The exact number and identity of all Australian volunteers serving with various organisations in support of the Serbian Army and people is unknown, but the following are some of these volunteers:

Ethel volunteered to serve as a nursing sister with the Second British Red Cross Mission to Serbia in 1915. The Mission operated a hospital in Vrnjacka Banja treating wounded Serbian soldiers and civilians suffering from the typhus epidemic brought to Serbia by Austro-Hungarian prisoners of war captured by the Serbian Army in fighting in 1914.

Ethel and her companions were captured by the invading German and Austro-Hungarian troops in November 1915 and were repatriated to Britain in February 1916.

After the end of the war, Ethel was awarded the Serbian Cross of Mercy by the Government of Serbia in recognition of her work helping the Serbian wounded and sick during the war. Ethel's medal was lost, but it has been replaced by the same type of medal acquired from the market and Ethel's grandson, Richard Cooke, is exhibiting this medal together with the letter from the Red Cross notifying Ethel that she has been so honoured.

Ethel wrote about her experiences with the Serbs and excerpts of this document are also exhibited.

Dr Mary DeGaris, the second woman to become a medical doctor in Victoria, volunteered to join the Scottish Women's Hospitals unit in Ostrovo, Macedonia in 1917-18, which supported the Serbian Army at the Salonika Front. Mary was at first second in charge of the unit, a 200 bed hospital treating mainly Serbian Army wounded and sick. After the Chief Medical Officer in charge, Dr Agnes Bennet of Sydney, was forced to leave due to illness with malaria, Mary was appointed to command the unit and performed numerous operations on wounded Serbian soldiers, some whilst enemy planes were dropping bombs around the hospital.
At the end of her tour of duty, Mary received letters of thanks from a number of Serbian soldiers, excerpts of which are exhibited.

Mary was awarded the Order of St Sava, 3rd class, by a grateful Serbian Government.

Serbia suffered the worst casualties, as a proportion of its population, of all nations in World War One. Out of a population of 4 million, Serbia lost 1.1 million people in the war, or 27% of its population and over 60% of its male population. 265,000 Serbian soldiers died or 25% of all mobilised men.
Course of Events
28 July 1914 Austria-Hungary declares war on Serbia and hostilities begin. Belgrade bombed 29 July 1914.
August 1914 Austria Hungary invades Serbia with large forces and superior equipment.
August 1914 Battle of Cer. Serbia defeats the invading Austro-Hungarian army and ejects it from Serbia. The Austro-Hungarians suffered a total of 37,000 casualties of whom 7,000-10,000 died. Serbia suffered about 3,000 dead and 15,000 wounded. This was the first Allied victory of the Great War.
September 1914 Austria-Hungary invades Serbia for the second time. Heavy fighting at the Battle of Drina is inconclusive.
November 1914 Austria-Hungary invades Serbia for the third time, capturing Belgrade and other Serbian territory.
December 1914 Battle of Kolubara. Serbian Army counterattacks and wins a significant victory, driving the enemy from Serbian soil. The Austro-Hungarians suffered 225,000 casualties, including 30,000 killed, 173,000 wounded and 70,000 taken prisoner. Serbia suffered 22,000 killed, 91,000 wounded and 19,000 missing or captured.
1914-1915 Austrian POWs bring typhus to war-ravaged Serbia, killing over 150,000 people. Foreign medical missions arrive to help fight the epidemic and support the Serbian Army and civilian population.
October 1915 Germany, Austria-Hungary and Bulgaria invade Serbia from the North, West, East and South East with overwhelming forces and superior equipment, trying to encircle and destroy the Serbian Army.
November 1915 The Serbian Army conducts a fighting withdrawal south to Kosovo and Macedonia, expecting Allied help from Salonika, which does not arrive in time. The Serbian Government decides that the Army, Government and refugees retreat to the Adriatic coast over the Montenegrin and Albanian mountains.
November 1915 The Serbian Army destroys its heavy equipment and retreats over the mountains at peak of winter, November 1915-January 1916, losing thousands of casualties to starvation, cold, exhaustion, disease and attacks from Islamic Albanian tribes. Some 155,000 men reach the coast and are transported to Corfu for rest and re-equipment by the Allies. April 1916 the Serbian Army is transferred to the Salonika Front.
1916-1918 Serbia is occupied by enemy forces, which plunder the country, commit atrocities and herd thousands of civilians into concentration camps. Serbian uprising in Timok put down with brutality by occupying forces.
Sep-December 1916 Serbian Army wins Battle of Kajmakchalan against Bulgarian and German armies, re-occupying a part of Serbia.
September 1918 Serbian Army wins Battle of Dobro Polje against German and Bulgarian armies, as the spearhead of the Allied offensive on the Salonika Front.
November 2018 The Serbian Army liberates Serbia from German, Austro-Hungarian and Bulgarian occupation.