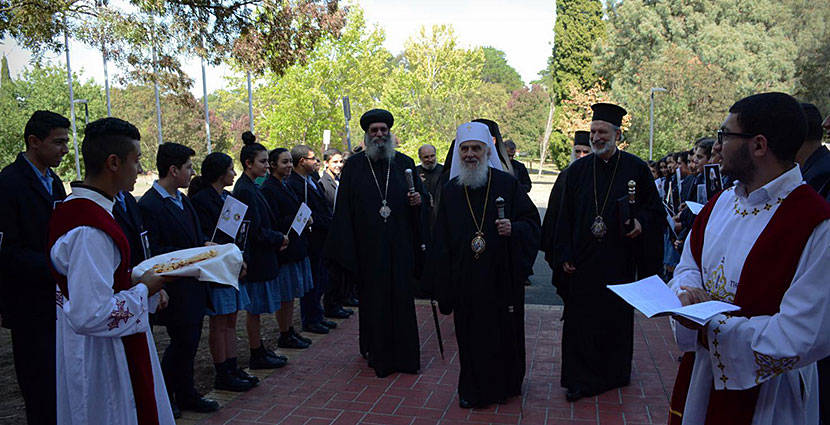 The Patriarch visited the Saint Athanasius Coptic Theological College. Visits to churches in Adelaide and the skete of the Holy Mother of God in Inglewood. Serbian Patriarch in Sidney. The visit to the parish on the Central Coast. Welcome at Greek monasteries.

Serbian Patriarch Irinej, accompanied by Metropolitan Amfilohije and Bishop Irinej of Australia and New Zealand, visited the Saint Athanasius Coptic Theological College (SACOTC) in Donvale on 8 March 2016. Serbian Patriarch Irinej held a lecture on the topic of the role of the Church in modern trends to attending representatives of the Ecumenical Patriarchate, the Roman Catholic Church, the Anglican Church, the native – Coptic Church, professors and lecturers at this College, which are in the same time eminent representatives of the University in Melbourne.

The Dean of the SACOTS, Bishop Dr Suriel of Melbourne, along with professors of this renowned educational institution of the Coptic Church, prepared an unforgettable welcome for the delegation of the Serbian Orthodox Church.

In the evening, with the flight from Melbourne to Adelaide, the delegation of the Serbian Orthodox Church was solemnly welcomed at the local airport, from where it went to the church of Saint Sava in Hindmarsh, where doxology was served. Hosts in this church were protopresbyter-stavrophor Zoran Ivanic and deacon Jovan Jovcic.

From there, the delegation with the solemn entourage went to the church of Saint Sava in Woodville Park.

Next day, on 9 March 2016, the delegation visited the skete dedicated to the Nativity of the Most Holy Mother of God in Inglewood, where hieromonk Marko and nun Suzana with a few dozen believers welcomed Patriarch Irinej, Metropolitan Amfilohije and Bishop Irinej. Later, the aforementioned believers escorted the high delegation to the next flight to Sidney.

At the Cathedral church of Holy Great-martyr Prince Lazar in Alexandria (Sidney) the high gests were welcomed by the Metropolitan Administration chancellor ad interim and the head of the church Very Rev. protopresbyter-stavrophor Miodrag Peric and chairperson of the Church-school community Momir Vukoman.

On the second day of the visit to Sidney, 10 March 2016, Serbian Patriarch with his delegation visited a mission dedicated to the Synaxis of the Serbian Saints, which is located in the zone of the so-called Central Coast.

At the Consulate of the Republic of Serbian in Sidney in the evening there was a diplomatic reception in honor of the official visit of His Holiness Irinej, Serbian Patriarch to Australia. The hosts of this event were H.E. Ambassador Miroljub Petrovic and Consul General Branko Radosevic.

source/photo: Aleksandar Sekulic (translated by the Information Service of the SOC)