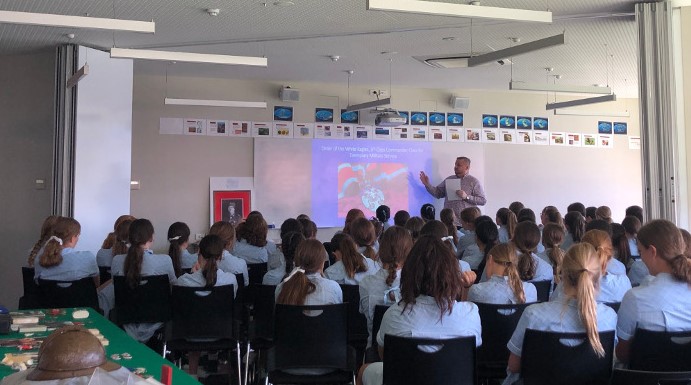 It was with great enthusiasm that the faculty of history at Roseville Anglican College took the offer of Mr Marko Trifunovic (member of the SOC Metro executive Board) to curate an exhibition of Serbian WW1 artefacts at their school. The exhibition was for the entire year 9 history cohort as these students have been studying the historical accounts of “Unknown Australian Heroes of WW1 and WW2”. The session started with a moving music video clip of Australian Aborigines who served in the Australian Imperial armed forces in WW1 and in WW2.
Mr Trifunovic focused on the ANZACS who served at the Thessalonica front with the Royal Serbian Army as they attempted to engage the Austro-Hungarian imperial occupying forces in Serbia.
The exhibit included a collection of Serbian Orders and medals that were awarded to ANZACS for their heroic efforts in the liberation of Serbia from occupying forces during WW1. Several books were also on display including Our Forgotten Heroes: Australians and New Zealanders with Serbs in World War One (Author: Bojan Pajic). The students were particularly fascinated with the French made Serbian battle helmet.
Mr Trifunovic gave a 30 minute presentation on various aspects including:
- The importance of studying history in order to understand the current world we live in and to be able understand people and their culture
- The importance of viewing history from the perspective of the people at that time and not through current political filters or philosophies
- The reasons why Australians would volunteer to join the fight to liberate Serbia. The students were surprised to hear that through the use of the telegraph, radio and in the field reporting Australians were well aware of the plight of the small young nation of Serbia with a population of 4.5 million being invaded by an empire of 53 million. Further the Students were surprised to hear that at that time Papua New Guinea was a German colony only 150km distance from Australia. This hostile country had a naval base far too close to our shores.
- The role of Australia’s first female doctors who organised and operated surgical field hospitals virtually at the front line.
- The role of heroic Australians such as Olive King who drove ambulance trucks to the front line to evacuate Serbian soldiers under constant enemy fire. Olive would go on to save hundreds of Serbian soldiers and became good friends with the Serbian Royal family. Olive king was the only Australian to have formally joined the Royal Serbian Army and was awarded the Order of St Sava Commander class.
The students in turn asked well thought out questions and showed immense interest in the topic especially in the roundabout way Australian woman served at the front line. It was at this presentation that the students were given their semester projects: to research a unknown Australian hero and create a museum information display.
For further information on ANZACS serving with the Serbian Royal army see the links below.
- https://www.awm.gov.au/articles/blog/AustraliaandNZSerbianfront
- https://scholarly.info/book/our-forgotten-volunteers-australians-and-new-zealanders-with-serbs-in-world-war-one/
- https://www.amazon.com/Serbian-Decorations-Through-History-Australians/dp/0994571712
IMG_5231
IMG_5237
IMG_5241
IMG_5243
IMG_5252
IMG_5257
IMG_5266