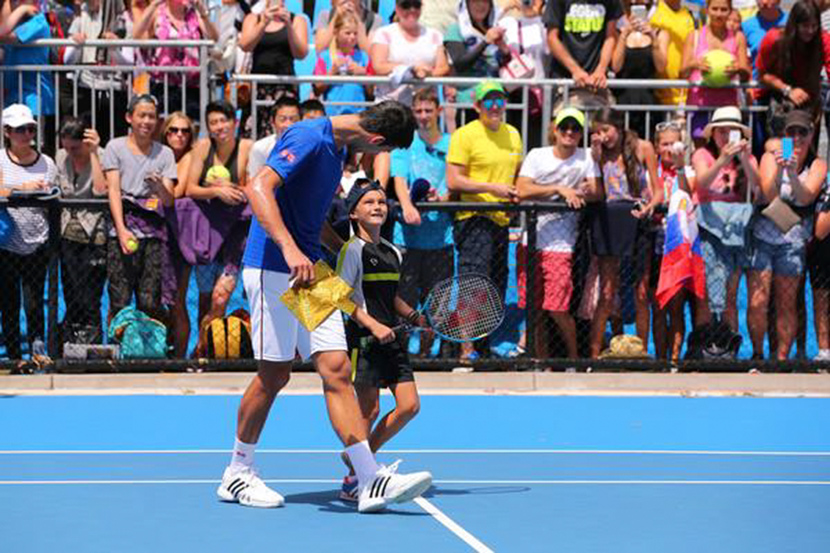 World number 1 men's tennis player Novak Djokovic has once again shown his loyalty and passion towards his fans. On Wednesday, 21st January 2015 after Novak's training session, he made his way over to greet his many fans. Amongst the fans was a young 6 year old boy Stefan Stefanov from Gold Coast, Queensland who had been cheering for Nole along with his brothers Dejan and Ilija Stefanov. The Stefanov brothers are the sons of Fr Nikola and Popadija Natalija Stefanov from the St Nicholas Serbian Orthodox Church in South Brisbane, Metropolitanate of Australia and New Zealand.

Novak reached over the fence and picked up Stefan from the crowd to accompany him on the training court. After a brief chat between Novak and Stefan the two began their intense training session. After it was bought to Novak's attention by Stefan, soccer was Stefan's choice of sport, Novak challenged Stefan in a game of tennis-soccer.

It was a truly remarkable day for the Stefanov family and a memory that Stefan will cherish forever. Novak showed and continues to show the true humble champion he is on and off the court. Novak we wish you all the best for the Australian Open 2015, and many more wins for the future.