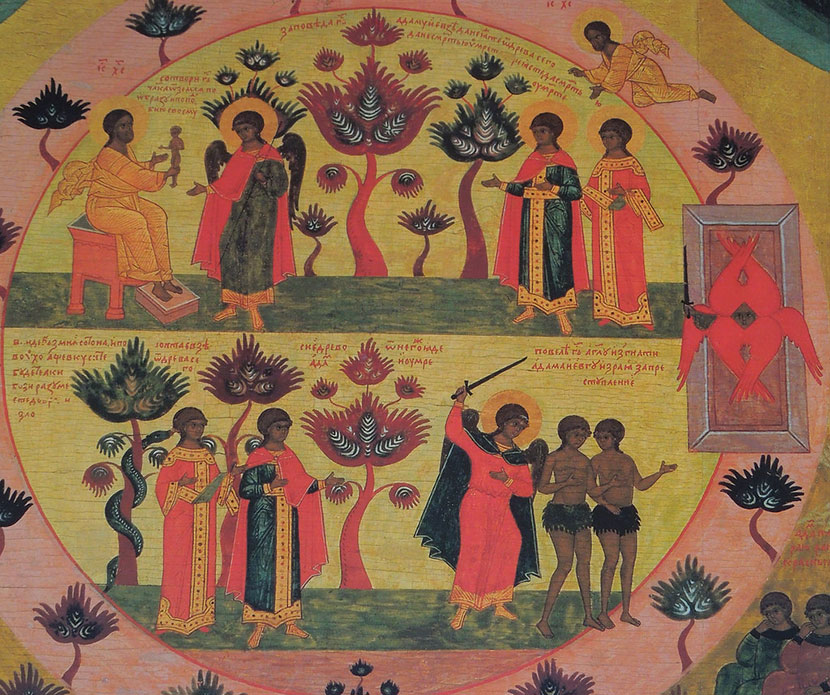 "For if you forgive men their trespasses, your heavenly Father will also forgive you. But if you do not forgive men their trespasses, neither will your Father forgive your trespasses." We can see here that God still respects His gift of freedom for humans. He does not command us to forgive, He is just telling us what are the consequences if we do not forgive. If we don't forgive others by our own free will, we willingly flee from the forgiveness of God for ourselves. This is also very clear from the parable of the unforgiving servant (see Mathew 18:21-35). If we really want to become children of God through deification, we have to struggle to do whatever Christ, our new Adam, does. To forgive is to be like God, because God forgives everybody unconditionally. Following Christ we are actually acting like gods, living life according to God, in other words a godly life. We are called to acquire virtue, compassion, holiness and even perfection. "But as He who called you is holy, you also be holy in all your conduct, because it is written, "Be holy, for I am holy."(1 Peter 1:15). Also, "therefore you shall be perfect, just as your Father in heaven is perfect." Prayer, forgiveness and mercy are Christian virtues that make a man into a Christ-like and God-like being. These virtues cannot be separated from Lent, and they are all mentioned in the same chapter (Matthew 6) before we receive these instructions about how to fast. The four preparatory Sundays are also confirming that. That is why we begin Lent with the Vesper service of Forgiveness where all faithful present forgive each other. So, the first step is forgiveness, and then we begin to fast.

"Moreover, when you fast, do not be like hypocrites, with a sad countenance. For they disfigure their faces that they may appear to men to be fasting. Assuredly, I say to you, they have their reward." The message is very simple: we are not fasting because of people, but for our own spiritual growth until we become children of God. If we fast because we want praise from people, we will then receive reward from people, not from God. People's praise and applause will not bring us any spiritual benefit. That is a terrible temptation that doesn't apply only to fasting, but also to prayer and charitable giving. Christ warns about that in the same chapter of this gospel (see Matthew 6:1-13). In all three cases Jesus uses the same expression: " Assuredly, I say to you, they have their reward." Meaning: their lives are wasted in vain, because they did not receive their reward from God, but from people who cannot save them from death and corruption.

"But you, when you fast, anoint your head and wash your face, so that you do not appear to men to be fasting, but to your Father who is in the secret place; and your Father who sees in secret will reward you openly."

This doesn't mean we have to constantly anoint our head and wash our face during lent. Any change of our physical appearance during the lent would point us out as someone who holds the fast. The head represents the inner man including our soul and our mind. The face represents a physical body, or exterior of a man. Using this expression, we are reminded to keep clean from sinful desires and urges of our fallen nature: our mind, our soul, our physical body and all of our senses that are anointed on chrismation. All of our spiritual efforts will be visible to God, and should stay invisible to the people. God will reward us openly on the Judgment day when everybody's deeds will be revealed.

The following temptation is even dangerous. People seek security and pleasure in temporary and corruptive things, which prevents them from paying attention to the most important thing which is to establish a relationship with the Father through Christ. Jesus warns about that problem: "Do not lay up for yourself treasures on earth, where moth and rust destroy and where thieves break in and steal." Then He reminds us again to direct our life towards the eternal and uncorrupted Kingdom of God. That is the only treasure that cannot be lost or perished. "but lay up for yourself treasures in heaven, where neither moth nor rust destroys and where thieves do not break and steal." We want to have eternal life, and we know that everything in this world is perishable, corrupted and mortal. Why do we bind ourselves to these temporary things if we know all this? The last verse of this gospel explains: "For where your treasure is, there your heart will be also." These words are warning to redirect our hearts from temporary and mortal things to eternal and heavenly things. Our pure heart is the only organ we can use to see God. "Blessed are the pure in heart. For they shall see God." (Matthew 5:8). People with pure hearts have nothing in them except God. The parable about the rich young man (Matthew 19:16-23) gives us an example of that problem. This young man was holding every commandment of God; he had everything money could buy, yet he couldn't renounce his wealth to follow Christ. His wealth controlled his heart. Christ doesn't warn that only material things could become our treasure. Man is capable of declaring anything in this world as his precious "treasure", and become obsessed with that "treasure" on a daily basis. That temporary and corruptible "treasure" is the main obstacle for man entering into life everlasting. The Apostle Peter clearly reminds us about this problem:" You were not redeemed with corruptible things, like silver and gold, from your aimless conduct received by tradition from your fathers, but with the precious blood of Christ, as of a lamb without blemish and without spot." (1 Peter 1:18-19). "Aimless conduct" is a life wasted in sinful living that always ends in death. Apostle Peter says that the blood of Christ is more precious then the most precious things in this world: silver and gold.

The only treasure we should hold in our hearts is Jesus Christ. Love towards Christ will open doors to many virtues that lead to life everlasting. The Great Lent is the best time to practice and to feel the riches of our beautiful Orthodox Christian faith by following our new Adam - Jesus Christ into His Resurrection.