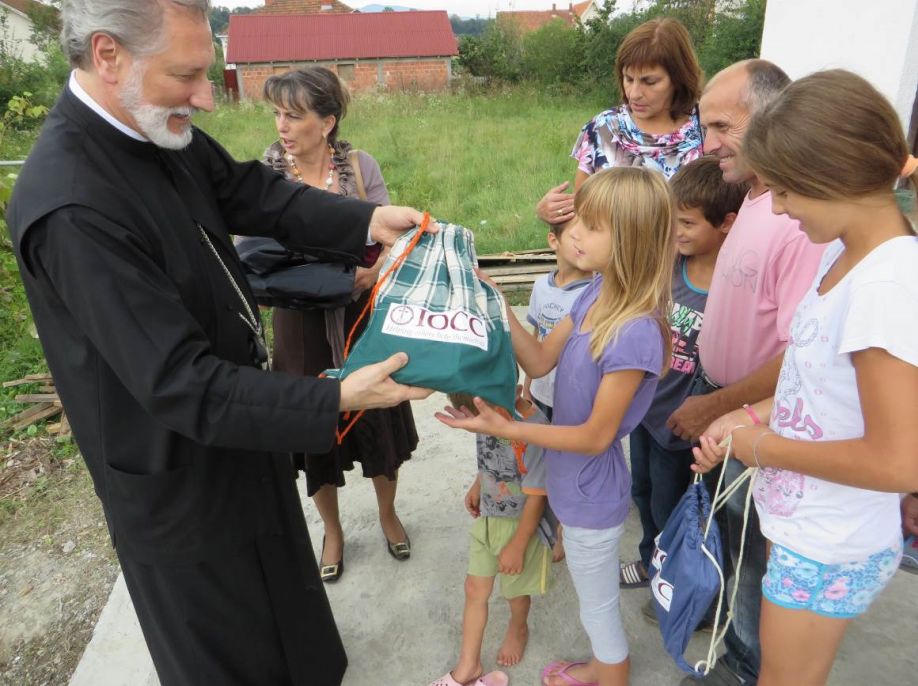 With funding support awarded by the Serbian Orthodox Metropolitanate of Australia and New Zealand and in cooperation with Red Cross of Kraljevo, International Orthodox Christian Charities – IOCC implemented the flood response program for the flood affected population of four villages in Kraljevo municipality, running from 01st July, 2014 to 30th September, 2014; the project was implemented professionally, completed on time and within the operational budget.

The project is fully aligned with IOCC strategic objectives and priorities of the emergency flood response program that IOCC is conducting in Serbia and Republika Srpska – BiH.

Starting May 13, 2014, Serbia and Bosnia and Herzegovina experienced sustained torrential rains - by some estimates several months of average rain fell on the region in less than week - that resulted in the worst floods in at least the last century.

Large sections of the Sava River and its major and minor tributaries in the watershed flooded, from the western reaches of northern Bosnia to the confluence with the Danube at Belgrade, and throughout the region flash floods and landslides caused extensive damage to infrastructure, people's homes and communities.

Over seventy people lost their lives, while hundreds of thousands of people were affected by the floods, thousands were evacuated and thousands more were isolated within the flooded areas, cut off from main roads without ready access to drinking water, food, medicine or power.

The extent of severity to which people are affected by the flood is different from place to place, and very much depends on local geographic and environmental conditions, and peoples individual losses and damages made on their property. For that reason, IOCC has conducted detailed needs assessments within almost all most affected regions of Serbia.

Kraljevo municipality, which is amongst the worst affected by the floods in Serbia, has been selected for developing and implementing this specific project.

Kraljevo municipality is located beside the rivers Ibar and West Morava, in the midst of an upland valley. It is the administrative center of the Raška District of Serbia, with the administrative area consisted of 16 settlements.

The current population of Kraljevo (census 2011) is approximately 125,488, which includes migration from rural areas and a still-significant number of internally displaced persons from Kosovo and Metohija (around 19,500) and refugees from BiH and Croatia (around 500).

The residents of flooded villages in Kraljevo are particularly vulnerable, still recovering from a devastating earthquake in 2010 that damaged thousands of homes, hundreds of which were irreparable and needed demolishing. The impact of the floods is most visible within the villages previously affected by the earthquake, leaving those families that were already vulnerable in an especially dire situation.

Unfortunately, devastating floods in Serbia and BiH did not stop in May 2014. In early August 2014, the new wave of flooding hit Western Serbia and Central / Northern BiH; some areas flooded in May 2014 are flooded again and many landslides are awaken; new flooding brought new victims, continue damaging roads, bridges and peoples' homes.

Floods continued in September 2014, and an emergency situation has been declared in the three eastern Serbian towns of Kladovo, Negotin and Majdanpek.

The situation was the worst in Kladovo municipality, where the water brought down two bridges and closed the roads; the municipality is basically cut off; large amounts of rainfall have shifted entire hills and traffic is completely disrupted and villages Tekija and Grabovica are almost wiped out.

The ultimate goal of the program is to implement multi - sectorial emergency action to improve the humanitarian situation of vulnerable populations affected by floods in Kraljevo, by restoring access to livable homes.

The practical implementation of the project activities started in July 2014, soon after the floods, as part of IOCC's emergency response to the needs of the flood affected population in Serbia. At the beginning of the project, most of the targeted families were out of their homes, mostly near their villages, living with their relatives or in rented facilities. For describing the implementation process in details, it is divided in specific project components, as follows.

INCEPTION PHASE & VERIFICATION FIELD ASSESSMENT
The period between endorsement of the submitted project to the Serbian Orthodox Metropolitanate of Australia and New Zealand and the official start of implementation of project activities is considered as the project Inception Phase.

During the inception phase, IOCC has re-examined project activities as planned and described in the submitted proposal, in view of any external factors that may influence their implementation (e.g. some specific activities, similar to the proposed, having commenced by other organizations in the meantime; weather condition changes; affected population movements; etc.). For that reason, prior starting the practical implementation of the project, IOCC conducted additional field assessment of the targeted areas.

The verification field assessments showed almost zero changes in the operational environment, which just reconfirmed original decision in regards to the scope and type of the intervention proposed.

The initial assessment on which the funded flood response intervention is built was in-depth and of high quality, due to good knowledge of and access to local communities by IOCC and Red Cross of Kraljevo.

The assessments also entailed strong participation of targeted community members who contributed in identification of their priority needs, and this shaped IOCC's final intervention strategy. Most of the houses suffered serious damage to floors / floor covers, as well as to the wall plastering (mostly 50 to 85 cm height); within the assessment areas, a smaller percentage of identified houses have faced significant structural damages beyond repair.

To adequately respond to such needs, each selected beneficiary family received required building material for repairing their homes; in addition IOCC staff has provided professional engineering assistance provided on an as-needed basis.

Within Kraljevo municipality, the project focused on rural communities whose shelter, livelihood and other resources had been either washed away or badly damaged by the floods, leaving them homeless and economically insecure; the target villages were, even before the floods, were among those with significant level of poverty.

BENEFICIARIES SELECTION PROCESS
In cooperation with Red Cross of Kraljevo , which is directly engaging the affected communities, the project focused on the worst affected and most vulnerable population living in the flood affected areas. In order to identify beneficiaries who are demonstrating the greatest level of vulnerability and need for assistance, IOCC and Red Cross of Kraljevo have employed the following beneficiary selection criteria:

Due to the involvement of local Red Cross chapter and focus communities' inhabitants, beneficiary selection was transparent and participatory. The program achieved and in fact exceeded all of its targets as per the original plan and 73 beneficiary families, instead of the 60 originally planned, were reached; an achieved increase of 22%.

ASSISTANCE COMPOSITION / IMPLEMENTATION ARRANGEMENTS
According to the needs of the targeted beneficiaries, the specific composition of immediate relief assistance was developed not only to provide short-term rehabilitation of severely disturbed life of the targeted rural population, but also to assist preservation of complete households.

The compositions of distribution items have been prepared in close cooperation with the Red Cross of Kraljevo office, and assistance recipients themselves.

In an effort to minimize the logistic timeframe and to maximize the support to affected area and its local economy, all purchases were made locally. Using an open and transparent system in accordance to the local laws and organizational procedures, IOCC and Red Cross organized the process of purchasing the planned assistance.
Red Cross of Serbia carried out the preliminary process of identifying the potential suppliers, and in coordination with IOCC final suppliers were selected. The procurement process entailed a detailed market assessment and collection of information from potential suppliers and joint review of received information by IOCC and Red Cross of Serbia evaluation committee.

The procurement process was carried out in two consecutive phases, allowing both IOCC and its local partner to maximize the effects of the program and utilization of available funds.

 The first procurement / distribution phase was carried out during the August 2014, for 60 assistance recipient families; 60 is the originally planned number of project beneficiaries. All assistance was purchased from three different suppliers, selected in accordance to their ability to deliver required types and quantities of construction materials and tools.

- Assistance purchased and delivered to 60 assistance recipients, from local company DELHEM COLOR PLUS:

In addition to the above specified assistance, using funds from other donors, Red Cross of Kraljevo has secured the additional assistance to each of 60 families targeted in first round of distribution, including:

The assistance was purchased from three different suppliers, selected in accordance to their ability to deliver required types and quantities of construction materials and tools.

- Assistance purchased and delivered to 11 assistance recipients, from local company DELHEM COLOR PLUS:

REPAIR & RECONSTRUCTION WORKS / INTERVENTION SAMPLES /
The repair & reconstruction activities started in August 2014; immediately upon completed market research process and identification of the suppliers. In addition to the construction materials, IOCC and Red Cross of Kraljevo have secured professional engineering assistance to project participants, on a need to basis. The work has been divided in following phases:

The intervention is completed in September 2014.

In an effort to strengthen the capacity of Red Cross of Kraljevo in responding to flooding, IOCC has secured funding support for purchasing required tools and equipment, including:

His Grace Bishop Irinej and IOCC handed over donation to the Red Cross of Kraljevo; during the first visit of His Grace to Kraljevo.

GIFTS IN KIND – GIK ASSISTANCE
As the contribution to the project, for flood affected families, IOCC has secured the GIK assistance that included:

The GIK assistance was distributed by the Red Cross of Kraljevo.

In an effort to avoid unnecessary duplication of efforts, on the ground, IOCC worked closely with Red Cross of Kraljevo. The IOCC Program and Finance Managers were responsible for all aspects of program implementation and management at ground level, with IOCC Headquarter based support, supervision and monitoring.

Overall management and broad program goals were the responsibility of the IOCC Headquarters office (HQ) in Baltimore, Maryland where the IOCC Director of Strategic Initiatives supervises all IOCC operations in the Balkans. All financial, logistics and related controls, systems and procedures carried out in field operations are governed and reviewed by IOCC Headquarters.

All project activities were closely monitored and followed by IOCC and implemented with Red Cross Kraljevo. Red Cross field office in Kraljevo served as the center of the project's monitoring and distribution activities. During the lifecycle of the project, IOCC Program Manager conducted regular visits to the targeted areas. During these visits, all crucial decisions related to program dynamics and visits to the field were made in cooperation with Red Cross Kraljevo staff.

First visit was conducted immediately after the flooding, during the June 2014. His Grace, accompanied by Fr Saša Radoičić visited flood affected areas, including villages of Grdica and Adrani. Furthermore, His Grace worked closely with IOCC and Red Cross of Kraljevo on design of the emergency response program.

The second visit was conducted in late August 2014. The purpose of the visit was to witness the progress of the project funded by the Serbian Orthodox Church - Metropolitanate of Australia & New Zealand, implemented by IOCC in partnership with Red Cross of Kraljevo.

Both visits of His Grace Bishop +Irinej were followed by local and regional TV stations that have visited the field and made interviews with His Grace Bishop Irinej, families participating in the project, and representatives of IOCC and Red Cross of Kraljevo.