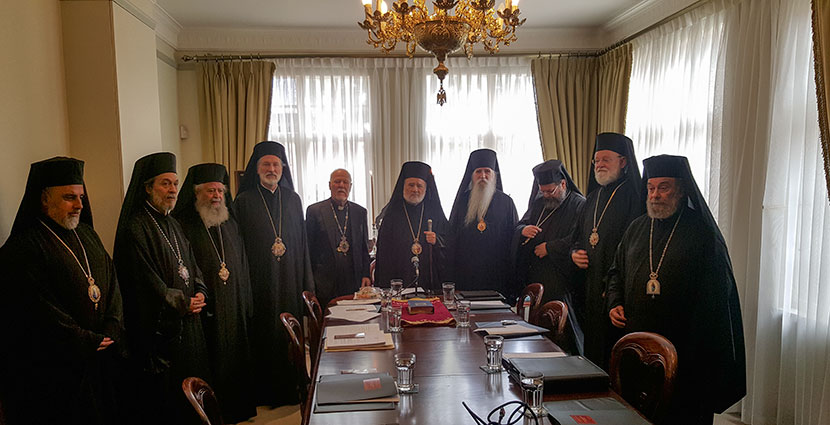 The members of the 5th Episcopal Assembly of Canonical Orthodox Bishops of Oceania welcomed the opportunity to meet in Sydney on Tuesday 13th October, 2015, under the chairmanship ex officio of His Eminence Archbishop Stylianos of Australia.

In attending to the pastoral needs of the faithful, the Assembly deliberated on some of the socio-political challenges confronting the Orthodox Churches in Australia and New Zealand. All hierarchs had an opportunity to raise concerns and solicit opinions from the experience of fellow bishops. In light of the discussion, amongst all else, the following decisions were rendered:

1. Same Sex Marriage: Regarding this deeply divisive issue, and the need for the Orthodox Churches to safeguard traditional marriage, appreciation was voiced to the Greek Orthodox Archdiocese for their exemplary work in terms of educating their clergy and faithful as well as civil servants on "Speak up for Marriage: Protect the Sanctity of Marriage." In this context, the Assembly voiced its concern for the need of children having both a father and a mother.

With regard to the issue of children adopted by same sex couples, including the issue of baptism, it was decided that the baptism of such children be left to the pastoral discretion of the respective local bishops.

2. Pan Orthodox Clergy Synaxis: It was decided to organise these once annually on a local basis so as to provide an adequate modus for regular gatherings which would avail the opportunity for priests to be updated on such issues raised by the Assembly as well as other pertinent matters. The importance of fostering brotherly relations amongst clergy was noted.

3. The Orthodox Australia and Oceania Website was approved and endorsed as the official website of the Assembly of Bishops (orthodox.net.au). This will now become available to all the faithful.

7. Orthodox Christian Hospital Chaplaincy Report: A report from the Coordinator, Mr Daniel Bellis was received with appreciation. This ministry of the Assembly at present serves the needs of Orthodox Christians in Victoria. It was decided to look into finding means and ways of broadening the scope of this program into other states.

8. A New Secretary of the Assembly was elected, Dr Philip Kariatlis. The work of the former Secretary, Mr Dimitrios Kepreotes was noted with appreciation.

The Assembly received with gratitude the decision of the Supreme Court of NSW of May, 2015, regarding the return of the Saint Sava Monastery, New Kalenich, located in Wallaroo, NSW to the Serbian Orthodox Metropolitanate in Australia and New Zealand. It is now hoped that this will deliver peace and stability within the Serbian Orthodox Church in Australia and maintain canonical order in this region.

The Assembly expressed its concern with regard to the plight of the Orthodox Christian faithful in Syria and of all peoples of the Middle East. The Assembly would like to encourage the powers of the world to find a solution to this unacceptable human tragedy. Additionally, the Assembly continues to pray for the safe return of the two kidnapped Archbishops, Paul and John. In like manner, the Assembly voiced its joy at the release and exoneration of Archbishop Jovan of Ochrid.